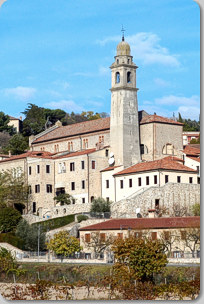 I recently returned to the Eugeanean Hills in Italy to take the waters that are available in the nearby small thermal towns of Abano and Montegrotto. The hot springs that flow from I Colli Euganei to the spa centres there help to bring feelings of health and well being to body mind and soul, good for young and old.

It was also an occasion to revisit the medieval village of Arcqua Petrarca to learn more about the Italian poet and humanist, Francesco Petrarca. He already inspired me to write about his life and work in Italy and in his spiritual home of the Vaucluse in France. Described as the first humanist, he is widely honoured in tomes of literature, library-museums and many other places too.

Petrarch and the past

In his own time Francesco Petrarca was recognized most of all for his Latin writings and not for his Italian poetry. It was, in fact, for his Latin epic, the Africa, and not his Italian rime that at the age of thirty-seven he received the crown of the poet laureateship in Rome in 1341. He saw Rome for the first time early in 1337, and the ancient ruins deepened his admiration for the classical age.

Father of Humanism, the complete bibliography of Petrarch, first attempted in Trieste 1828, forms a considerable volume. The Basel edition of 158l, in folio, is the basis for all subsequent editions of his collected works. Oxford World Classics has a translated edition of Selections from the Canzoniere, or Song Book, and other works by Petrarch. Its select bibliography covers Translations and editions, Criticism, Petrarch’s influence. Cyberspace has opened a vast window on the life and writings of Petrarch. Much of his classical and so-called popular work, with iconography, is available on-line as is comment and analysis by historians and scholars worldwide.

Petrarch and the present

In November 2003 it was announced that pathological anatomists would be exhuming Petrarch’s body from his casket in Arcqua Petrarca in order to verify nineteenth century reports that he stood 1.83 metres, which would have made him very tall for his period. The team also hoped to reconstruct his cranium in order to obtain a computerized image of his features. Unfortunately, DNA testing in 2004 revealed that the skull found in the casket was not his, prompting calls for the return of the skull.

To mark the 700th anniversary of the great man’s birth, exhibitions, musical, literary, poetry and other major cultural events were held in Italy and in France. With official patronage of the Italian Embassy in France, and the Department of the Vaucluse, an international colloquium was held in Avignon (22-24 January 2004) on the theme of Defence and Illustration of Humanism, in which many international historians and scholars participated. It was a public event and its proceedings are expected to be published in due course.

The closing event of the celebrations took place on 24 August 2004 at L’Ile-sur-la-Sorgue, a short distance from Fontaine-de-Vaucluse, with a poetic-musical dialogue of Petrarch’s “Lettera amorosa” to his beloved Laura de Noves.

On 6 May 2006 in Geneva at the Forum Theatre, Meyrin, there was another poetic-musical event of excerpts from Francesco Petrarch’s work Il Canzoniere played and sung in Italian by Huelgas Ensemble from Belgium conducted by a star of Renaissance music. Performed in madrigal style, the Renaissance instruments including clavecin added authenticity to the concert drawn from 366 love poems in the Song Book written and dedicated to his beloved Laura de Noves, about whom literature continues to discuss as his real or imaginary love.

As Father of Humanism, events past and present will keep the life and influence of Francesco Petrarca to the fore in the 2lst century and well beyond.