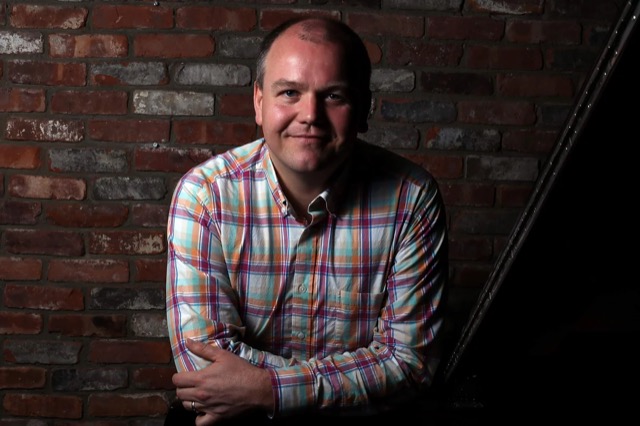 Christian L. Stahr is a famous musician, pianist, and orchestrator responsible for promoting Norwegian art and culture to New Yorkers. It is not an easy task, so he is always a very busy man. We were lucky to meet him in New York earlier this year, and he found time to answer our numerous questions. So now the floor is yours, Christian.

Q: You are a composer, pianist, and orchestrator. Please tell us a little about yourself.

I grew up in Sarpsborg, playing the piano at age five and the trumpet in a marching band the year after. I was very interested in music from early on, listening and playing my toy guitar to "Børud gjengen", and watching all the marching bands in the May 17th parade past my grandfather’s house. He gave me a wooden fruit box he turned upside down so I could use it as a drum and play along with the music.

I also became interested in theater when I was younger, seeing the musical Les Miserables in London during a family trip in 1997. My sister and I did not want to see the show, but my parents insisted that we go since they spent lots of money on those tickets but told us we could leave in the intermission. But when the interval came, I was waiting for the 2nd act to start. The combination of that fantastic music and story, seeing the conductor, and watching those incredible actors left a massive impression on me.

So years later, when I was studying Musicology at the University of Oslo, I wanted to learn more about writing music for the theater. I couldn’t find any schools in the Scandinavian countries, but one school popped up during my web search, Tisch School of the Arts at New York University. They had a 2-year MFA program called Graduate Musical Theater Writing Program, which was exactly what I was looking for. But I was terrified of moving to a country where I couldn’t speak Norwegian, but I sent in an application anyway, and a few months later, I was invited to audition. In March 2010, and went with my family to New York City for the first time. There I auditioned during the weekend, was accepted, and began my studies in the autumn of 2010.

While in the program, I explored my voice as a composer and learned to collaborate with lyricists and book writers on how to write a show from idea to finishing the final rewrite. These two years were intense, with lots of deadlines and presentations. The full-length musical we wrote for our final thesis and it was performed as a staged reading with Broadway actors.

I also served military duty in His Majesty the King’s Guard in 2004. I served in a special performance unit within the King’s Guard, where I was a bugle player. Among the highlights was our participation in the main ceremony of the 60th anniversary of D-Day in Normandy, where we performed in front of current heads of state involved in World War 2. I also played background piano during official dinners with the King and other dignitaries and arranged and orchestrated music for the band. In the spring of 2004, the comedians Trond Kirkvaag, Knut Lystad, and Lars Mjøen, called KLM, were shooting the final chapter of their comedic series "Brødrene Dal." And for the final scene, they needed a bugle player, and I was chosen. It was so much fun to be part of, and I will never forget the kindness of these legendary comedians which I grew up watching. You can see me during the last scenes of the final episode of "Brødrene Dal og mysteriet om Karl XII’s gamasjer".

Q: You composed the musical Olav den Heldige which has been performed every summer since 2013 in your hometown Sarpsborg. How did you get the idea for this historical musical?

The family musical «Olav den Heldige og Lykkesverdet» was performed for the first time during the Olavsdagene (Viking festival in honor of the founder of my hometown, St. Olaf) in Sarpsborg in 2011. At that time it was a children’s show with Andreas Humlekjær playing Olav, and Patrik Stenseth playing all the other characters. They also created the show. Andreas, who I had worked with on several projects before, called me a week before opening, asking if I could join and add music and sound to the show. And, of course I said yes, which turned out to be lots of fun performing in a tiny circus tent in Kullåsparken in Sarpsborg summer of 2011.

The year after, in 2012, we were asked to be part of the program at the Olsokdagene på Stiklestad (Viking festival in the middle of Norway, where St. Olaf died in battle). We performed an updated version of the show in a long replica of a Viking-era longhouse, which was a fantastic experience. During the festival, we met actor and director Gard B. Eidsvold, who was there with his own theater company, Statsteateret. He came and saw our show and was very enthusiastic about what he saw. At the same time, the Olavsdagene festival in Sarpsborg was looking for a new family-friendly show. The representatives came and saw our show and were interested in having us be the main show during the festival. And so it turned out, we transformed the show into a full-length family musical with Gard Eidsvold as the director and actor, five more actors, and me as the composer and music director. We opened with colossal success in the summer of 2013, and until 2016 we had expanded to a 4-piece band, six main actors, plus several extras. In the fall of 2015, we took a new updated version of the small show on a month-long school tour as part of "Den kulturelle skolesekken" (Cultural program for elementary schools). And the summer of 2016 was my last year with the show, but variations of the show continue every summer during the Olavsdagene festival in Sarpsborg.

Q; You have also composed another musical, 4Real, that has been touring Norway since 2015. Please tell us about it.

This musical came together with Silje L. Waters as the lyricist and coauthor, Martine B. Lundberg as another coauthor and director, and me as the composer. It started with an idea Silje had about how much social media impact our lives. We had our opening at Teaterkjellern in Oslo in the fall of 2015 and on tour with "Den kulturelle skolesekken" in 2016. The show became part of Norway’s first musical theater festival "Musikaliteten" in 2017.

Q: You are now living in Brooklyn, a place where many Norwegian immigrants used to live. Why did you choose to live there? Was it on purpose or simply by coincidence?

The summer before I started my studies at Tisch School of the Arts, I had to find a place to stay, and I randomly ended up in Clinton Hill in Brooklyn. I fell in love with Brooklyn, and when my girlfriend, now wife, was moving from North Carolina to New York, we were looking for a place in Brooklyn. We ended up moving into an apartment in Park Slope, and to this day, we love our neighborhood. It’s lovely to come home to Brooklyn after working in Manhattan all day.

Q: Today, you are also in charge of the cultural activities in the Norwegian Seamen’s church in New York, notably the Trygve Lie Gallery. What does this involve?

We have a lovely gallery in the basement of the church called Trygve Lie Gallery, named after the Norwegian Trygve Lie, the first Secretary-General of the United Nations. The gallery is open to Norwegian-American artists who want to promote their work to a New York audience. We are fully booked for the next year, with Norwegian artists living in Norway and the U.S. will show their fantastic work. We currently have an exhibit by artist Jome Feoca called "Tayo. Oss". It’s open during our regular opening hours (Wed-Sat 12-4 pm/Sun 10 am-2 pm).

Q: How do you manage to converge your creative work with your work in the church?

I use any opportunity to do my work, either writing a musical piece or orchestrating for others. But for six years, I collaborated with actress and writer Hilde Skappel. We started practicing together in the Trygve Lie Gallery (a great grand piano there) and then moved on to writing songs for the church employees that were moving back to Norway. During our writing sessions, we also realized we had lots of shared ideas for musicals, and we started working on several stories. In February 2019, Hilde organized a charity concert at the Norwegian Seamen’s Church for the organization "Dråpen i havet" ("A Drop in the Ocean"), where lots of her artist friends participated. We wrote the theme song for the concert, "A Drop in the ocean." Sadly, in the summer of 2019, Hilde passed away. During the beginning of the pandemic in 2020, I wanted to record the song, so I got in touch with many of our musician friends who all wanted to participate in a virtual recording. You can find the music on my website and Youtube.

After Hildes’ passing, it was hard to do much creative work. I still have several projects we started, which are half-written, which I would love to finish one day.

Q: Do you have any projects in the U.S.? If people would like to listen to your music or attend an event, what can they do?

On my website, www.stahrmusic.com, you can get updates on my work and find links to my music on Spotify, Apple Music, or Youtube, as well as purchase sheet music if you are interested in playing some of my piano compositions.