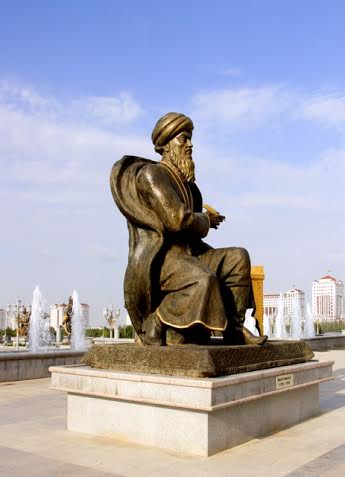 “The poetical world of Pyragy – is, in fact, the Turkmen philosophy generated in the course of millennia, the melody of Turkmen soul, and the invincible spirit of the Turkmen”. President of Turkmenistan Gurbanguly Berdimuhamedov

In the culture of any nation, there is a striking personality – a spokesman of major traits of the national mentality. Magtymguly is the one for the Turkmen people, his work reflects the traits of the nation’s spiritual character and national self-consciousness. Magtymguly Pyragy – is the great artist of a word, the creator of wonderful work which had narrated to the world about the millennium-long formation of the nation’s philosophy, dreams and hopes of the people. In his memoirs, the academician and researcher of the Orienttal hl istory, Vasiliy Bartold, wrote: “The Turkmen are the only Turkic nation, which has its own national poet, who lived in the XVIII century; Magtymguly was recognized by the Turkmen who inhabited the territory from the Stavropol province up to the banks of Amudarya River”. Having devoted his talent to the everlasting universal values, Magtymguly is one of the brightest personalities of the global spiritual-intellectual process. The poet’s literary heritage is not only the national asset of the Turkmen people, but a part of the world cultural treasure. His literary creation ranks with the poetry of Goethe, Shakespeare, Dante, Pushkin, Byron…

This year Turkmenistan celebrates 290th anniversary of the birth of the great poet Magtymguly Pyragy, who is not only a remarkable historical personality closely connected with his epoch, but a vivid image that keeps having an influence upon us. This remarkable occasion will be broadly and solemnly celebrated in our country and far beyond. It is also symbolic that the International organization TURKSOY has announced 2014 as the Year of the renowned poet and classic of the Turkmen literature, philosopher, great thinker of the East - Magtymguly Pyragy.

Perhaps, in the history of Turkmenistan, it is difficult to find any other poet whose creative work would have been so organically apprehended by the people. The Pyragy’s poetry is conjugated with the nation’s self-consciousness and the acquired-by-the-nation literary language, with everything light, wonderful, and good the Turkmen people value best of all, and which contains the substance and essence of the nation’s spiritual and moral-aesthetic quests. It is difficult to overestimate the role of Magtymguly in the development of social-political thought, as well as the outstanding significance of the poet’s work in the spiritual development of the nation.

The ideas of great Magtymguly were seen by his contemporaries as a passionate call and patriotic appeal, as the Turkmen nation’s spiritual and moral constitution that led the people forward, inspired confidence in them, illuminated the way forward with the unfading light of truth. The poet’s philosophical views on conscience, honor, freedom, justice, closely intertwined with universal values and found their embodiment in the Main Law, the Constitution of the independent neutral Turkmenistan.

In the creative work of the great thinker Magtymguly Pyragy, the Turkmen people found the spiritual guidelines, learned lessons of patriotism, honesty, justice, love of freedom. The Turkmen people managed to preserve, retain through centuries, the best human merits praised by Pyragy – honor, generosity, patriotism, respect for neighbors, diligence, hospitality, fidelity to the ideals of peace and goodness. The dreams of cohesion and unity of the Turkmen people, of glory and universal recognition of the beloved Motherland, promoted in the immortal verses of the poet and prophet, centuries later have been fulfilled in the life of the modern Turkmenistan. Today the work of Magtymgyly helps to better understand history, to recognize the origin of spirituality of the Turkmen nation. The people have carried their love for Magtymguly through centuries demonstrating the inextricable link between the past and present. The poet’s poems sound like an anthem to patriotism and freedom, unity and solidarity, spiritual and ethical principles of the Turkmen people. In XIX century a renowned Hungarian traveler and scientist Armin Vamberi after his visit to Turkmenistan wrote: “The very most interesting and extremely indelible impression had on me those minutes when I head bakhshi, singing one of Magtymguly’s songs during a festivity or an ordinary party….” He also observed that the Turkmen people perceive Magtymguly “as a miracle-worker who has comprehended all the books, all the sciences of the world... His book will for long take the first place for Turkmens, after the Koran”. Centuries after, the poetic lines of the classic of the Turkmen literature carry to the people the light of goodness and humanism, praise the best human merits, and find understanding with representatives of all nations. Throughout decades, in different countries of the world, people study literary heritage and philosophy of Magtymguly which is based on the principles of peace loving, good neighborliness, humanism and justice.

Annually on May 18 Turkmenistan widely and solemnly celebrates two holidays together– the Day of Revival, Unity and Poetry of Magtymguly Pyragy and the Day of Constitution of Turkmenistan. As stressed by the President Gurbanguly Berdimuhamedov: ”It is very symbolic that the date of passing of the Constitution, which has absorbed the principles of humanism, justice, unity and solidarity of our people, is celebrated as a double holiday – together with the Day of Poetry of the great Turkmen thinker Magtymguly Pyragy, for all the poetry of the great thinker and humanist is imbued with the nation’s sacred dreams about the sovereign state, happy life, unity and well being”. In conclusion, it is worth noting that after three centuries, in the XXI century, the Turkmen people cherish and treasure the name and the legacy of Great Magtymguly Pyragy as never before, who remains unique poet as were Pushkin, Schiller, Byron…

The Future of the Turkmen

Fanned expanse from Khazar ripples To a smooth Jeyhun by winds of Turkmen Bliss of my eyes – rose fields, - Flow, generated by the mountains of Turkmen

And shade and coolness in the Turkmen gardens! And ners and maya are grazing in the steppes Reyhan blooms in ocher sands Meadows abundant in flowers Turkmen

In green, scarlet peri will pass In the face ambar ointment will smell The amicable people are leaded by the wisest Proud land of the people of Turkmen

The soul of Gorogly in his brothers is alive Look, friends, at a Turkmen lion. He doesn’t search for mercy When he rises before enemies of Turkmen

The dzhigit will look in anger at mountain, Mountain quail and ruby lights. Not water but honey in a flood rages The stream – in union with fields of Turkmen

The Turkmen will not be taken unwares by war. The former need was forgotten by the country. Here roses do not fade-from them any, Doesn’t complain apart from the singers of Turkmen

Wherever the road may lead Turkmens, Mountain ranges of the earth will part. Descendants will remember Magtymguly – Will truly be the mouth of Turkmen.