Ms. Clinton asked the Conference on Disarmament to begin negotiations on a fissile material treaty 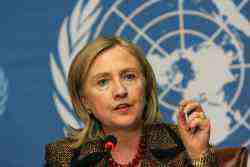 During a press conference at the Palais des Nations in Geneva, Secretary of State of the United States of America, Hillary Clinton said nearly 20 years after the end of the Cold War the world had more than 20,000 nuclear weapons. The world faced no shortage of ingredients for nuclear weapons, and yet more ingredients were produced every day. Halting production was in the interest of every country and the United States urged the Conference on Disarmament to end the stalemate and open negotiations on a Fissile Material Cut-Off Treaty without further delay. Such a treaty would be an important step and build on the notable progress which had been achieved over the past years. The United States, for its part, had reduced the prominence of nuclear weapons in its national defence and had met with other members of the Treaty on the Non-Proliferation of Nuclear Weapons for a successful review conference on that treaty. It had also brought the new Strategic Arms Reduction Treaty into force together with the Russian Federation.

This Conference had always cherished the principle of consensus, but the patience of the United States was not infinite; there was no excuse for a State to misuse the consensus rule. It was clear that there was a wide range of views inside the Conference and that these must be accommodated. Progress would be difficult and take a number of years, but that was all the more reason to begin this process now. Global nuclear security was too important 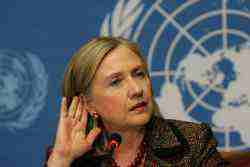 to allow this matter to drift forever. The Fissile Material Cut-Off Treaty was critical; if they were serious about not letting nuclear weapons fall into the hands of terrorist, the available amount of such material must be reduced. The United States was committed to reducing nuclear weapons and the risk of nuclear proliferation, its vision being a world without nuclear weapons. This would take time, but was attainable in the view of the United States, if taken step by step. Ms. Clinton asked the Conference on Disarmament to begin negotiations on a fissile material treaty and expressed hope that action would be seen from this esteemed Conference that had meant so much to the world. The United States stood ready to support the beginning of negotiations and to try to accommodate legitimate national interests to reach such a treaty. This was too important a matter to be left forever, Ms. Clinton underscored.