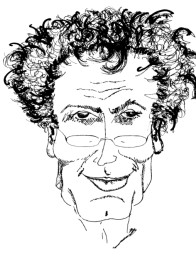 Whatever you do, have fun!

A tall figure topped by a curly mop of hair. Jean-Michel, in high spirits welcomes me to his information office at UNECE. I had written a "counter-article" after reading his article published in the UN Special magazine, in which he gently mocked my security colleagues. Behind his desk, he looks at me with a twinkle in his eye. His multi-coloured tie and socks and warm-coloured jacket are in stark contrast to the dress code adopted by his counterparts. In his soft, calm voice, he immediately asks me to join the editorial board.

Jean-Michel was a bit of an iconoclast and impertinent, in a good way. He worked for an organization of which he was so fond that in 2006 he published the "UN for Dummies", co-authored by his colleague Yves Berthelot.

His extreme intelligence enabled him, among other things, to give confidence to many contributors who were unaware of their talents and to calm others who thought they were journalists or even writers, but always with humour and kindness. This humour, sometimes biting, was apparent in his editorials. He knew how to capture a given situation through a fine and documented analysis of the shortcomings and bureaucracy of the organization. How many approving smiles have appeared on the faces of readers over the years? As editor-in-chief for 10 years, he used his freedom of expression to give this publication a new lease of life with the shift to digital, and to serve the organization. He was thus able to validate a successful model of public-private partnership. As UNECE’s Information Officer, his boundless energy and creative talent led him to produce, with his teams, recipe books (Rice around the world in 300 recipes and The Potato around the world in 200 recipes), or comic strips to teach children about the United Nations.

You can still (and for some of you it will be with nostalgia) find his editorials in the book "10 years of a UN monthly diary" (*) , dedicated to Kofi Annan, with evocative titles such as the year of love or of microcredit, the empty fortress, the pathetic symphony or the sex of angels.

Right from the beginning of his retirement, Jean-Michel started a successful career as a hypnotherapist and published numerous books on the subject. With his son, Emmanuel, they had recently co-written a book on artificial intelligence (L’intelligence artificielle, une révolution?). In times of excessive political correctness, when it is recommended to remain within the bounds of the law or risk damaging one’s career, Jean-Michel understood better than anyone else that the pleasure of writing, based on conviction and benevolence, is priceless.

The entire editorial board team, his colleagues and friends are sad to see the passing of a figure who has left his mark on our daily lives.