"Uzbekistan GTL" - a giant plant in the middle of the steppe 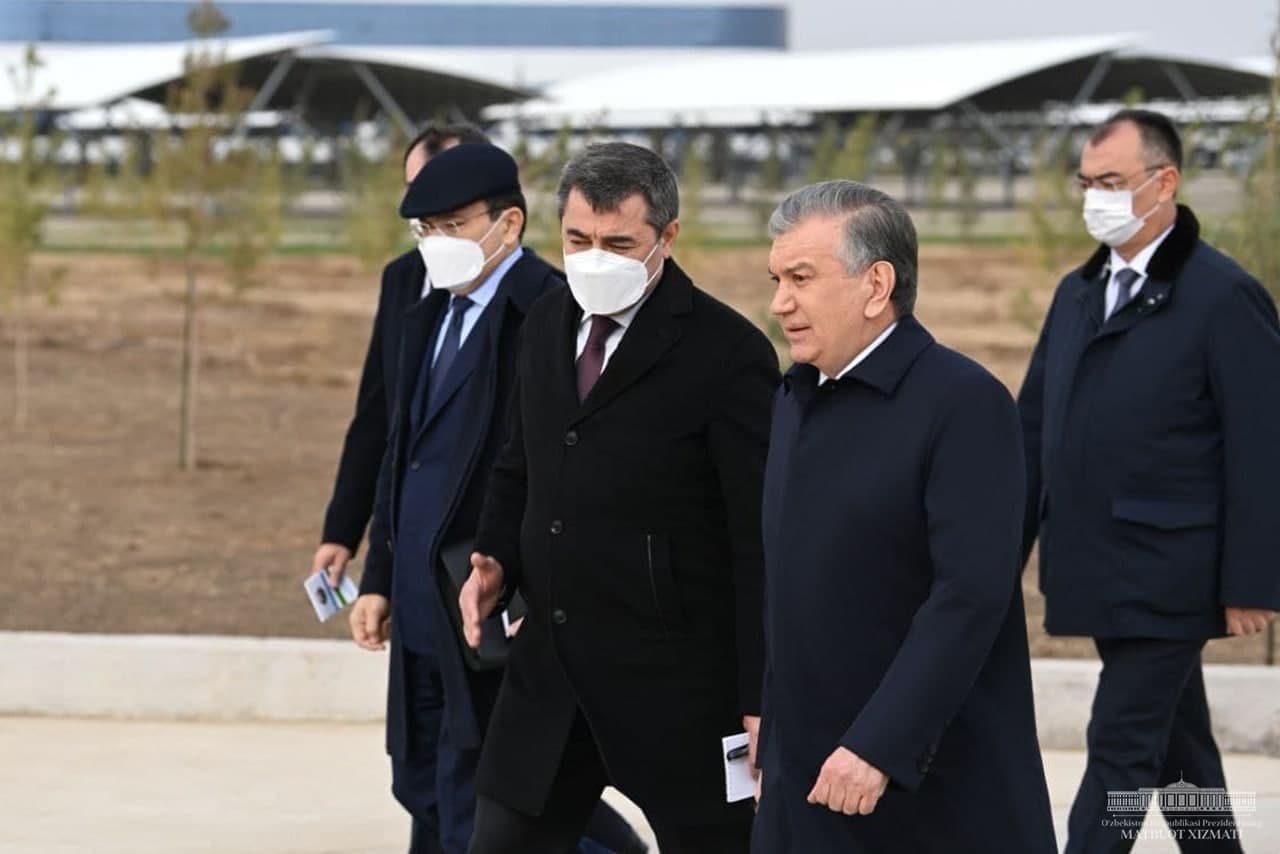 On 25 December 2021 «Uzbekistan GTL» plant was opened in Kashkadarya region of Uzbekistan.

Just a few years ago there was a bare steppe here. In a short time, a gigantic plant, a chemical cluster appeared on this site. This complex marks a new stage in the development of domestic industry. Its construction was under the constant attention of the head of Uzbekistan. The President came here and got acquainted with the progress of work in 2017 and 2018. The construction, which did not stop even during the pandemic.

The President of the Republic of Uzbekistan Shavkat Mirziyoyev participated in grand opening of the plant and walked around the complex to get acquainted with the technological process. 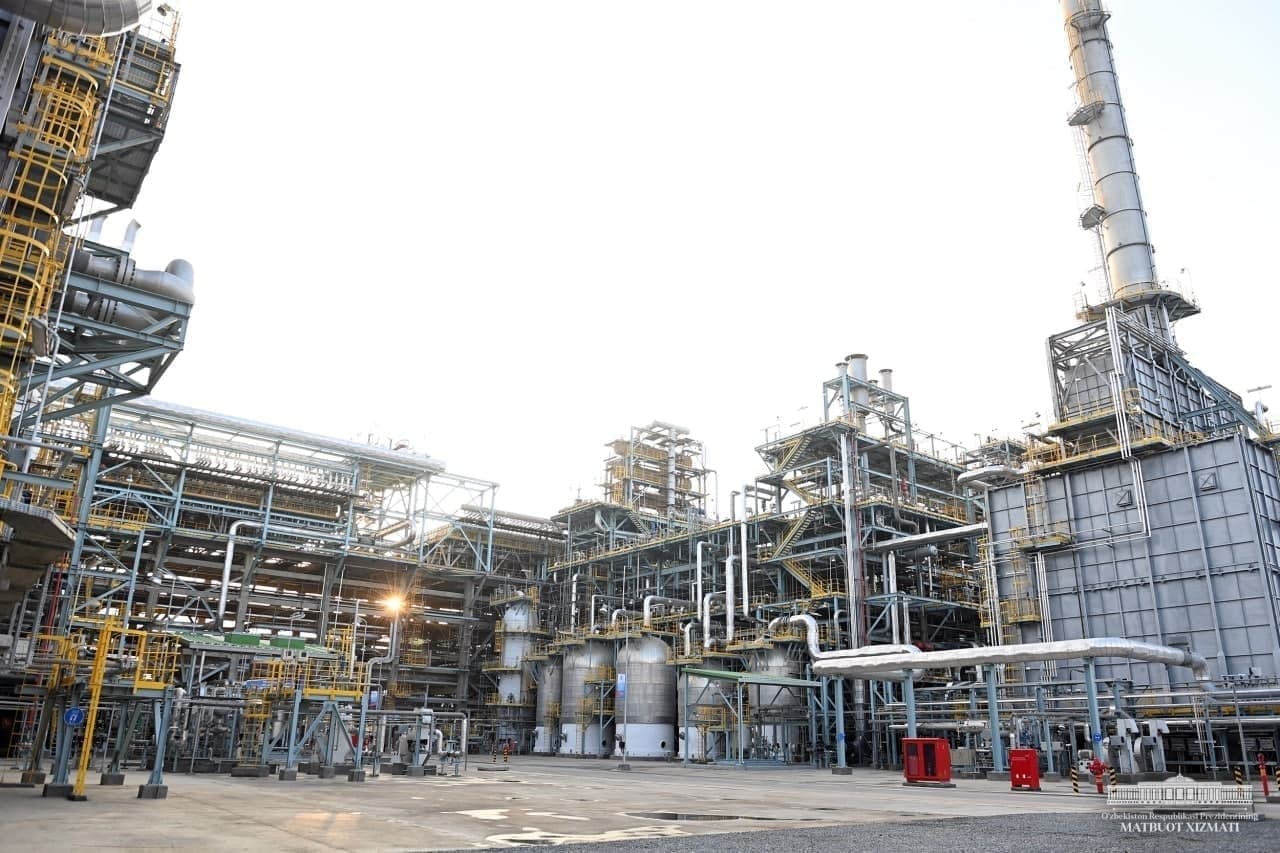 The plant is unique both in terms of investment and scale. Its cost is $3 billion 420 million, the area of facilities is 135 hectares. The fact that more than 13 thousand engineers and workers were simultaneously involved in the construction shows how much work has been done.

Prior to that, such large complexes were built in only four countries of the world - Qatar, Nigeria, South Africa and Malaysia.

More than 10 thousand pieces of equipment are installed at the plant, produced by about 130 leading enterprises in 24 countries, including Germany, Italy, Great Britain, Japan, South Korea, Singapore, USA, Russia and China. Received 140 international licenses and patents for the use of technological solutions, equipment and processes. Most of them have no analogues in the world. 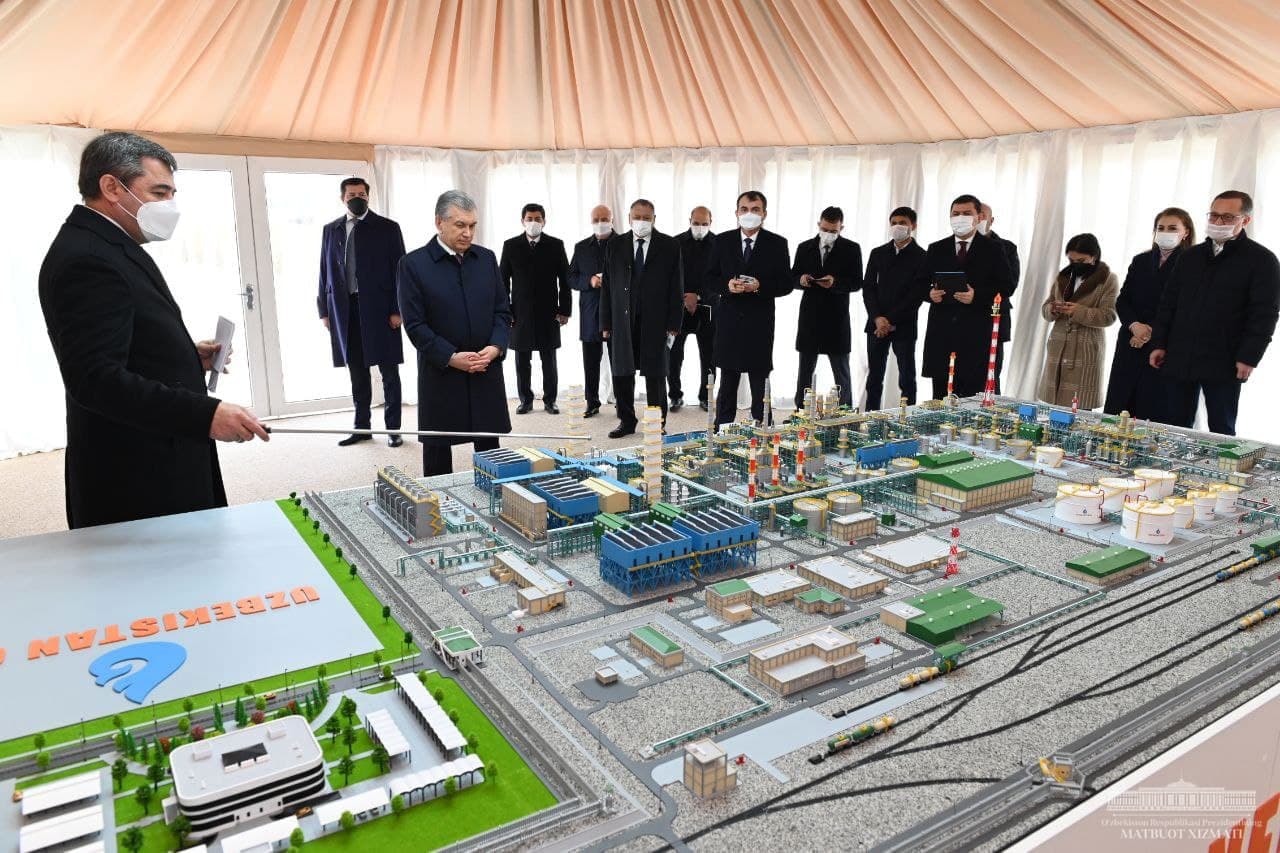 As for the economic effect, the plant will convert natural gas into finished products in high demand on the world market, the cost of which is 3 times higher. In particular, aviation kerosene, which will be produced here, is much cleaner and of a higher quality in comparison with the products of other factories and is intended for the most modern aircraft. Diesel fuel also meets high standards - not less than Euro-6.

According to the estimates of the International Energy Agency, the production of GTL products in the world will double by 2030. Therefore, it is planned to increase the output of other new types of products with higher added value. In particular, the plant will implement 6 projects worth $620 million for the production of products such as alkyl benzene, butene and hexene, synthetic oils, maleic anhydride, emulsion additives, catalysts. Such semi-finished products are widely used in the chemical industry, the production of household chemicals, furniture, building materials and electrical engineering, the textile and leather industries.

President of the Republic of Uzbekistan Shavkat Mirziyoyev noted that we have big plans in this industry. In the future, the demand for products manufactured here will only grow. The world is moving to a green economy. That is why we must use new geophysical equipment and deepen geological research.1

The giant plant requires a lot of energy. In this regard, the enterprise is self-sufficient. 650 million kilowatt-hours of electricity per year will be generated from the steam generated by the plant’s operation. Thanks to this, the plant provides itself with electricity, and can also supply electricity to the Shurtan Gas Chemical Complex and another new enterprise. The saved electricity will be used to supply houses and businesses.

The head of state visited the control room of the plant, from where the production and its safety are controlled and monitored. The center employs young people trained by the American corporation Honeywell.

“I am very glad to see that you, having mastered modern knowledge, having studied foreign languages, gaining experience abroad, are working at such an enterprise,” the President said in an interview with them. - Your knowledge is your wealth. A new enterprise worth $1 billion 800 million will be built next to the Uzbekistan GTL plant. By processing 430 thousand tons of naphtha per year, 380 thousand tons of polyethylene and polypropylene will be produced. About a thousand more jobs will be created.

Thus, the country’s first gas chemical cluster will appear in Shurtan. Production volumes in this cluster will be increased from the current $290 million to $1.8 billion in 2025, or will increase 6 times. The enterprises of the cluster from raw materials worth $1 will produce finished products with high added value - $10.

In Uzbekistan, it is planned to create 5 more chemical-technological clusters in Tashkent, Navoi, Fergana, Bukhara regions and in Ustyurt.