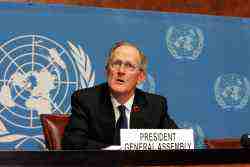 During a press conference at the Palais des Nations in Geneva, Joseph Deiss, President of the United Nations General Assembly, said these were uncertain times and it was up to the international community to help people around the world reach their hopes and aspirations. The last few months had seen many developments in the disarmament arena, including the New START Treaty between the United States and Russia. The disarmament effort did not stop with those two players, however. It was essential that all States that possessed nuclear weapons undertook measures to reduce their own stocks. Last year he visited Hiroshima where he was able to meet survivors and their families and men and women who were working to ensure that such a tragedy never happened again. The international community had to make the same commitment, collectively. They needed responses that went beyond countries acting alone; they needed approaches that went beyond national and regional security considerations; they needed a strong United Nations and Conference on Disarmament which showed leadership in various areas.

Mr. Deiss said that progress made over the last few months provided a firm foundation for their future work. One of the recommendations that came out of the Non-Proliferation Treaty Review Conference was the organization of a high level meeting, which took place in September 2010. The Conference on Disarmament was the sole multilateral negotiating body for disarmament matters and as such it was an essential instrument. The Conference must be strengthened and overcome its logjam. It was a question of the credibility of this forum and all its Member States. Even during the Cold War, the Conference had been able to come up with agreements so why could it not play the same leading role now? As President of the General Assembly he was concerned about this. It was always good to have broad based support for measures, but the rule of consensus could not be used to block their work and they needed to be flexible. The General Assembly was ready to make its contribution to the revitalization process of the Conference on Disarmament. Disarmament was one of the noblest goals of the United Nations and they should strive for its achievement. 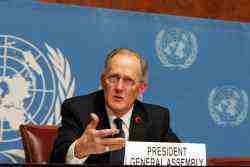 Ms. Clinton asked the Conference on Disarmament to begin negotiations on a fissile material treaty
Photo gallery of the visit of the Italian President Giorgio Napolitano during his visit at the Palais des Nations in Geneva