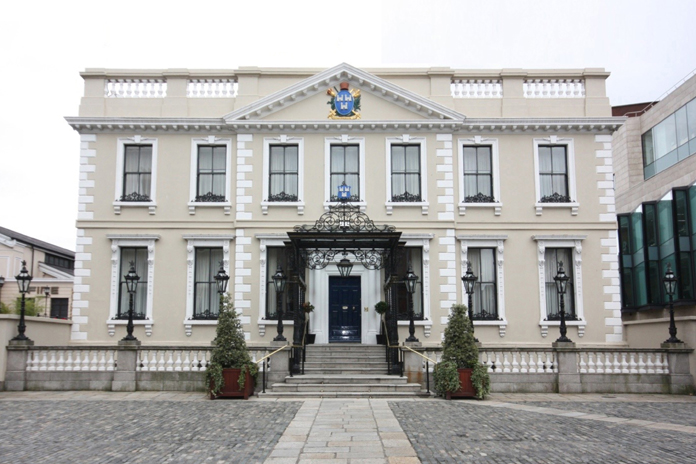 At the heart of historic Dublin, the Mansion House celebrated its 300th anniversary (1715-2015). It is the only mayoral residence in Ireland and is older than any surviving in Britain.

Home to the Lord Mayor of Dublin during his or her term of office, the Mansion House has been the centre of civic hospitality for three centuries. It is a rare example of Queen Anne style architecture in Dublin and is the oldest ‘free standing house’ in Dublin. A 1715 description of the house quotes ‘the rooms are all fourteen feet three inches high, all exactly well wainscoted with very good floors’.

The Mansion House was the centre of political and cultural activities for many years. Each step from the colony to Free State, to Republic was marked by an event at the Mansion House. In a time when Irish culture was fighting to survive, as urban and modern technology was threatening Irish rural culture, the Lord Mayor’s residence held many dancing championships and Feisanna bolstering the traditional community. Craft fairs and art exhibitions were also commonly held at the Mansion House supporting artisans in the young Ireland.

Built by the developer Joshua Dawson (1660-1727) and intended for use as his private residence, the then Dublin City Assembly purchased the house in 1715 for £3,500 sterling with an agreement to provide two fat capons (male hens) and a loaf of double-refined sugar weighing six pounds at Christmas - if demanded. A description of Joshua Dawson’s house, 1715 reads ‘A complete house, very fit for the reception and accommodation of the Lord Mayor of Dublin’. The Mansion House has changed since Joshua Dawson’s time - the exterior has been rendered, the front porch was added in 1886 and the original furniture no longer exists.

The Round Room in the Mansion House was built in 1821 to receive King George IV as it was deemed that there was no room grand enough in the city to receive royalty. A quote by Samuel Lewis, 1837 reads ‘a noble Rotondo, 90 feet in diameter, the walls painted in imitation tapestry and the room is covered with a dome’.

The first Dail Eireann was held in the same Round Room on 21 January 1919. Seventy of the 105 Irish representatives were absent from Westminster but only twenty-seven attended the inaugural Dail as the others were on the run from the British authorities. A large wall photograph in black and white is on display in the Mansion House. The long mahogany table in the Dining Room is where the Cabinet members for the first and second Dail or Irish Parliament sat. A noteworthy feature is a brass plaque which commemorates an historic meeting held in the Mansion House on 16 February 1948 resulting in the formation of the first Inter-Party Government in Ireland.

The Entrance Hall is one of the original rooms in the Mansion House and much of the panelling dates from 1710. Each room has its own identity featuring many ornate and precious contents from lighting, furniture, tapestry, carpets, grand portraits of patriots and politicians and a display of the personal coat-of-arms of every Lord Mayor from the Liberator Daniel O’Connell in 1841 to the present day. Each Lord Mayor meets with the Chief Herald to discuss and agree a coat-of-arms to reflect their family history and personal interests. There is a collection of framed photographs of men and women who have held Mayoral Office.

In the Entrance Hall on the wall opposite the fireplace there are a number of brass plaques commemorating the involvement of former Lord Mayors in famine relief during the nineteenth century. Of particular interest is one which marks the contribution of the Choctaw Nation of Oklahoma in the United States who gave generously from their meagre resources to assist the Irish people during the Great Famine in 1847.

In essence it remains the house as purchased from Joshua Dawson. He was from the class of ‘Irish Landed Families’, an Irish public servant, land developer and politician whose family possessed large properties in Ireland. Amongst other positions he was a member of parliament in the Irish House of Commons for the Wicklow Borough from 1705-1714. Most of the surviving ‘Big Houses of Ireland’ were built during the eighteenth century and many went out of private ownership after the Act of Union in 1800. At the beginning of the 19th century there were over 4,000 Big House Country Estates in Ireland; today there are less than 100 including The Mansion House in Dublin.*

The ornate staircase tells its own history and remains practically unaltered from the early eighteenth century. The balusters, which are three to a step, are much admired for their fine spiral turning. On the side wall of the staircase is a portrait of George IV by the artist Sir Thomas Lawrence, with frame by Thomas Byfeld of London. This was a gift from the King to mark his state visit to Dublin in 1821 and also to show gratitude to Dublin Corporation for supporting him in his divorce proceedings against his wife Caroline of Brunswick. A quote by the Dublin Assembly, 1821 reads ‘We behold this portrait adorning the Mansion of our Chief Magistrate’.

On the half-landing above is a stained glass window, made in 1900 by the Dublin firm of Joshua Clarke and Sons. The Lord Mayor’s official coat of arms is in the centre of the window and this is surrounded by the arms of the four Provinces of Ireland and by panels with the names of people who supported home rule including the writer Oliver Goldsmith and politicians Edmund Burke and Daniel O’Connell. Joshua Clarke’s son was the famous stained glass artist Harry Clarke.

The Mansion House has played host to international dignitaries, symbolic congressional events and the Mayor of Dublin’s family. It can be visited by special invitation or on specific open days. The historic and lavishly decorated Mayor’s coach is presently used to lead the annual Saint Patrick’s Day Parade and for the Dublin RDS Horse Show. It is described as “a virtual art gallery on wheels”.

Note: Acknowledgment is given to sources used in this text including extracts from Dublin City Council brochure 300 Years The Mansion House (1715-2015). *Power and Privilege: The ‘Big House’ in Ireland 1858-1922 was the title of a photographic exhibition at the National Photographic Archive (NPA), Temple Bar, Dublin, in 2011, and the subject of a published text by Ita Marguet.