Twenty-two years of Independence of Turkmenistan 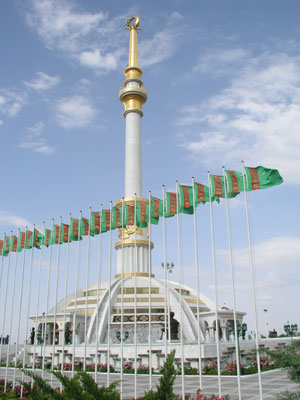 Twenty-two years ago on October 27, 1991, having received the support of the international community, Turkmenistan gained the legal status of an Independent State. This historical event has been the result of centuries-old hopes that came true and aspirations of many generations of the Turkmen people. Twenty-two years is a short period of time for the history. However, during this short by historical standards period of time the young independent state and its people have witnessed fundamental and crucial changes.

Today, under the leadership of the President Gurbanguly Berdimuhamedov, Turkmenistan is a model of stability and social and public consent and demonstrates to the world a convincing example of ambitious reforms of the Turkmen society.

Among the most important events of the independence era is the adoption of the Constitution on May 18, 1992, which enshrined on a legislative basis the desire and aspiration of the Turkmen people to build their secular and democratic State where the first priority is the interests of an individual. From the first years of its independence protection of the rights and freedoms of an individual, ensuring high levels of social and domestic living standards of the people were declared as the key directions of the State policy of Turkmenistan. Based on these priorities each stage of development of the country on the path to a market economy is coupled with the adoption of the necessary measures for the social protection of the population and providing unprecedented benefits to citizens of Turkmenistan that continue to exist to this day.

One of the main achievements of Turkmenistan during the years of independence is its neutrality. Turkmenistan is highly committed to the principles of neutral legal status. This is evidenced by the fact that the Resolution "On the permanent neutrality of Turkmenistan", adopted on December 12, 1995, was reflected in the Constitution of the country.

Based on the status of the permanent neutrality, Turkmenistan strengthens constructive cooperation with the United Nations which is the main guarantor of security and sustainable development around the world. Our country consistently sets out its specific proposals in this area from the rostrum of this authoritative international organization. Assessing the activity of Turkmenistan on the international arena one can say that it is carried out consistently and purposefully in strict accordance with the country’s neutral status as well as taking into account the real situation prevailing in the region and the world at large. This enabled Turkmenistan to positively develop relations with neighboring and other countries in the political, trade, economic and humanitarian spheres.

The basis of the foreign policy of Turkmenistan is formed by its neutrality, peace-loving, good-neighborliness, mutually beneficial cooperation and a strong commitment to the generally recognized rules of international law. Today, Turkmenistan, an authoritative and respected country in the world, is one of the key elements of regional stability and security. 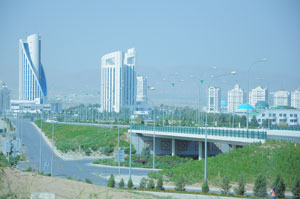 In order to ensure the economic security of Turkmenistan the main directions of the investment policy and strategies for the industrial development of the country have been developed. Relying on cooperation with the United Nations, the world’s leading research and educational centers Turkmenistan comprehensively introduces international standards into the education system. At the same time, work to improve this system along with the use of the best international practices is based on spiritual values and national traditions together with the rich historical and cultural heritage of the Turkmen people.

Among the most important tasks of the country in the era of independence is the introduction of new technologies in all areas of life and, especially, into the national economy. Today one can say with confidence that the essence and meaning of the term "innovation" has and will determine the features of the modern history of Turkmenistan. The main policy of the State in this area is aimed at diversification of the national economy, harmonious development of all regions of the country, introduction of new techniques in the monetary, fiscal and pricing policies, the development of market economy, State support of small and medium-sized businesses.

The leading sector of the national economy is the fuel and energy sector, and the introduction of new technologies in this industry is of great importance for its further modernization. In the energy sector Turkmenistan producing large volumes of oil and gas, aims for the equal and mutually beneficial cooperation with all countries of the world. In addition, Turkmenistan also works closely with foreign companies on preparation of joint projects on electricity and the use of other types of energy sources and, first of all, solar and wind energy. During the years of independence Turkmenistan has made great progress in the gas industry and, in fact, successfully pursues a policy of creating a system of multi-vector pipelines. Good examples of these are the pipelines "Turkmenistan -China" and a new branch of the pipeline "Turkmenistan –Iran" commissioned in 2009 and 2010 as well as the construction of the gas pipeline "Turkmenistan -Afghanistan -Pakistan- India", the work on implementation of which is actively carried out. 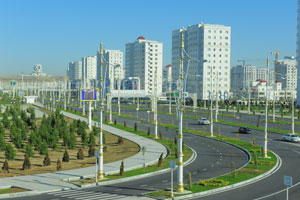 The high rates of socio – economic development of Turkmenistan are clearly seen in the radical transformation in the key sectors of the economy such as construction, textile, transportation and communications.

Located at the crossroads of intercontinental transport routes Turkmenistan effectively uses all the opportunities to establish mutually beneficial trade and economic relations. Among the major projects in this industry - Railroad "North –South", which is a symbol of the revival of the ancient Silk Road.

Due to the fundamental changes in the country along with other sectors of the economy the agricultural sector has also reached a new level. Turkmenistan has taken extensive measures to achieve more efficient work of agriculture, to increase production and improve the quality of agricultural products, to efficiently use export opportunities for the industry, to improve the working and living conditions of the rural population. Having taken all these actions Turkmenistan for the first time in its history has joined the group of States exporting grain. In Turkmenistan much attention is devoted to the development of the health care system, a healthy lifestyle. Today a special significance is given to a proverb "Health of the Nation is the country’s wealth!" At present, in all parts of Turkmenistan there are modern medical centers, new houses of health and other health care facilities and the construction of such facilities continues at high pace.

Along with this the Olympic movement in Turkmenistan has been steadily widening its scope. Turkmen land is the venue for major international sporting events. The decision was made to hold the World Cycling Championship 2016 in Turkmenistan. And Ashgabat will host the Asian Games 2017. All this testifies to the high international prestige of Turkmenistan, recognition at the international level of its tremendous achievements in all spheres of State and public life and also opens up new opportunities for the development of sports and health and fitness movements in Turkmenistan.

One of the most important vectors of this work is the development of tourism, the reconstruction of the resort and recreation system. A good example here is a large-scale project on creation of a National tourist zone "Avaza" on the coast of the Caspian Sea which is currently being implemented at the accelerated pace. After major reconstructions a number of well-known health resorts have found their second life, they also were equipped with the most modern medical equipment. In the future other unique natural mineral water springs and curative mud baths located on the territory of Turkmenistan will be developed.

In Turkmenistan, there are opportunities for the development of modern forms of international tourism - eco, sport, culture, and mass tourism. 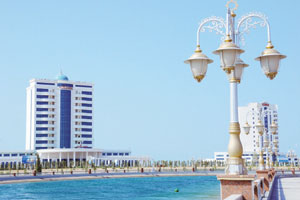 Today, the white marbled Ashgabat justly called the "pearl" of Asia, and the National tourist zone "Avaza" comply with all international standards of the development of urban and marine tourism. Children’s health centers constructed in the beautiful nature corner Geokdere and on the clean Turkmen coast of the Caspian Sea – act as a clear evidence of the State care about the health and harmonious education of the younger generation.

The past 22 years have marked the prosperity of the national culture in the full sense of the word, and the spiritual renewal of society. In the years of independence in-depth study of the rich cultural heritage of the Turkmen people, which have centuries-old glorious history, has begun. Today, this heritage has been restored and is carefully preserved as a national and universal value. The Government pays close attention to revival, promotion and study of national historical and cultural heritage as well as its careful preservation for present and future generations.

The Turkmen land is the motherland of not only the wonderful carpets and Akhal-Teke horses, which conquered the world for their beauty and playfulness. The great thinkers lived on this land. Here the heroic epics "Gorkutata" and "Gerogly" were created, which for many centuries determined the development of the consciousness of Turkic-speaking people. The eminent poet and thinker Magtymguly Fragi and other classics of the national literature created their beautiful works on this land. The Turkmen land is also rich in unique natural monuments and scenic spots, among them - one of the largest deserts in the world - Karakum desert. Turkmenistan, which is the successor of the ancient advanced civilizations, widely promotes its priceless spiritual heritage through cultural co-operation with the competent international organizations and, first of all, with the United Nations Educational, Scientific and Cultural Organization, and has accumulated sufficient experience of interaction. Back in 1999 national pride of Turkmen people – Ancient Merv with all its monuments has been listed as UNESCO World Heritage. And then Kunyaurgench and Nisa monuments have also received the status of monuments of universal significance. 22 years after independence have clearly shown that the path of development chosen by Turkmenistan – the modernization of all spheres of public life on the basis of national identity, combined with the peace-loving foreign policy, based on the principles of positive neutrality – is a correct one. The fact that the territory of Turkmenistan has turned into a giant construction site clearly proves that. It is impossible to list all accomplishments achieved in such a short period of history. The reforms were equally carried out both in the capital and in other cities in the most remote regions of the country. Thanks to these changes the meaning of a "remote region" disappears. Turkmenistan today is an economically developed country with the scientific and technological capabilities, which allow directing all the wealth of the generous Turkmen land for the benefit of not only people, but all mankind.

In general, describing the historical path traversed by Turkmenistan in 22 years of its independence, it should be noted that in this period formation of the concept "the modern stage in the newest history of Turkmenistan" has received great dynamics among both the Turkmen society and the international community. Namely – this stage in the life of Turkmenistan, which goes along the path of radical renewal, prosperity and progress – is the era of unprecedented changes in all spheres of the State and public life, carried out in the country at the initiative of the Turkmen leader Gurbanguly Berdimuhamedov.