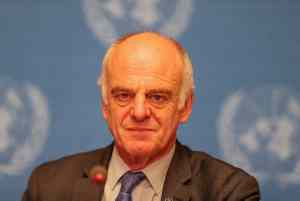 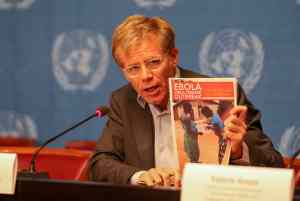 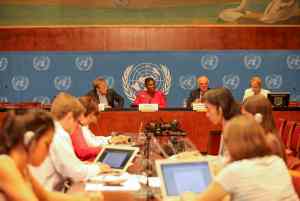 (Geneva, 16 September 2014): The United Nations and its humanitarian partners today inGeneva launched a central contribution of the response to the outbreak of ebola in West Africa.

“The ebola crisis is unprecedented. It requires an exceptional, international response to address both the health crisis and the broader societal, economic and political threats to the countries affected,” said Dr. David Nabarro, UN System Senior Coordinator for Ebola.

“A growing number of international partners are coming together in the Global Ebola Response Coalition (GERC). They will help implement critical actions and support a safe and disciplined response at national and international levels,” Dr. Nabarro said, calling on donors to give the response highest priority. The GERC includes authorities in affected and at-risk countries, civil society, private sector, non-governmental organizations, multilateral organizations, international financial institutions and UN Member States.

The ebola outbreak continues to accelerate with nearly 5,000 people infected and more than 2,400 deaths across Guinea, Liberia, Nigeria, Senegal and Sierra Leone. Up to 60-70 per cent of those infected do not survive.

The Overview of Needs and Requirements document presented to UN Member States, including the affected countries, goes beyond the need to treat, contain and prevent ebola. It includes elements of the response required to non-ebola humanitarian needs which have been compounded by the outbreak. The plan mainly covers activities in the three most-affected countries of Guinea, Liberia, and Sierra Leone for six months.

“We will do everything we can to support national governments, UN agencies, NGOs and other partners as they work on healthcare, food security, sanitation and protection issues. They are an essential part of the response if we are to stabilize this outbreak and mitigate its long-term effects,” said Valerie Amos, UN Under-Secretary-General for Humanitarian Affairs and Emergency Relief Coordinator.

The West Africa outbreak has a higher caseload than all other previous ebola crises combined and more than 22 million people are living in areas where active ebola transmission has been reported.

"The WHO Ebola Roadmap, launched at the end of August, sets out what we have to do to stop ebola. But it will take more than a plan to finish ebola. The strong commitment made by our UN partners and Member States is what is needed to beat this virus. And real engagement by world leaders will make the difference,” said Bruce Aylward, Assistant Director-General in the World Health Organization.