UNAIDS towards new goals for 2015 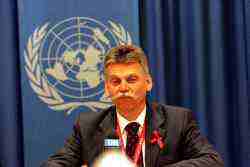 During a Press conference at the Palais des Nations UNAIDs Chief Epidemiologist and Analisis Div, Peter Ghys, underlines that as the world enters into the 30th year of the AIDS epidemic, UNAIDS will work to position the HIV response in a new global environment. Ten years after the United Nations Special Session on HIV/AIDS and the landmark adoption of the Declaration of Commitment on HIV/AIDS, member states are now preparing for the 2011 High Level Meeting on AIDS to review and renew future commitments for the AIDS response.

UNAIDS will be guided by the new UNAIDS strategy 2011–2015 , which aims to advance global progress in achieving country set targets for universal access to HIV prevention, treatment, care and support and to halt and reverse the spread of HIV and contribute to the achievement of the Millennium Development goals by 2015