“New initiatives of Uzbekistan on Human Rights” by Akmal Saidov* 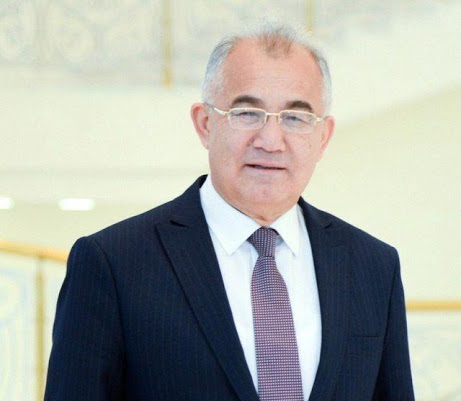 Akmal Saidov, First Deputy Speaker of the Legislative Chamber of the OliyMajlis (Parliament) of Uzbekistan and Vice-President of the Executive Committee of the Inter-Parliamentary Union, is Uzbek public official and jurist, expert in comparative law, international law, human rights, theory of state and law, constitutional law, author of well-known books. He is currently a full member of the Academy of Sciences of Uzbekistan, Director of the National Center for Human Rights, Member of the Sub-Committee on Finance of the Inter-Parliamentary Union, Vice-chairperson of the OIC Independent Permanent Human Rights Commission. He holds Diplomatic rank of Ambassador Extraordinary and Plenipotentiary with the status of Minister

Uzbekistan – member of the UN

The UN and the Republic of Uzbekistan have a nearly 30-year history of cooperation. Uzbekistan became a member of the UN on March 2, 1992. Main priorities of cooperation include fight against modern threats and challenges to security, non-proliferation of weapons of mass destruction, tackling environmental problems, in particular impacts of the Aral sea crisis, the socio-economic development, protection of human rights and freedoms.

The UN system supports Uzbekistan in addressing a wide range of development issues, including health, education and social protection, preservation of cultural values, protection of natural resources and biodiversity, fight against drug trafficking and spread of HIV/AIDS.

The Republic of Uzbekistan stands for strengthening the entire UN system, strengthening the role of UN structures in solving problems of regional and international security and ensuring sustainable development.

Participation of the President of the Republic of Uzbekistan Sh. M. Mirziyoyev at the 75th anniversary session of the UN General Assembly marked a significant event in the history of Uzbekistan-UN relationships.

All the initiatives put forward by Uzbekistan within the framework of the UN have found full support from the international community and today make a significant practical contribution to ensuring universal peace, maintaining regional stability, continuing sustainable development, and the protection of human rights. 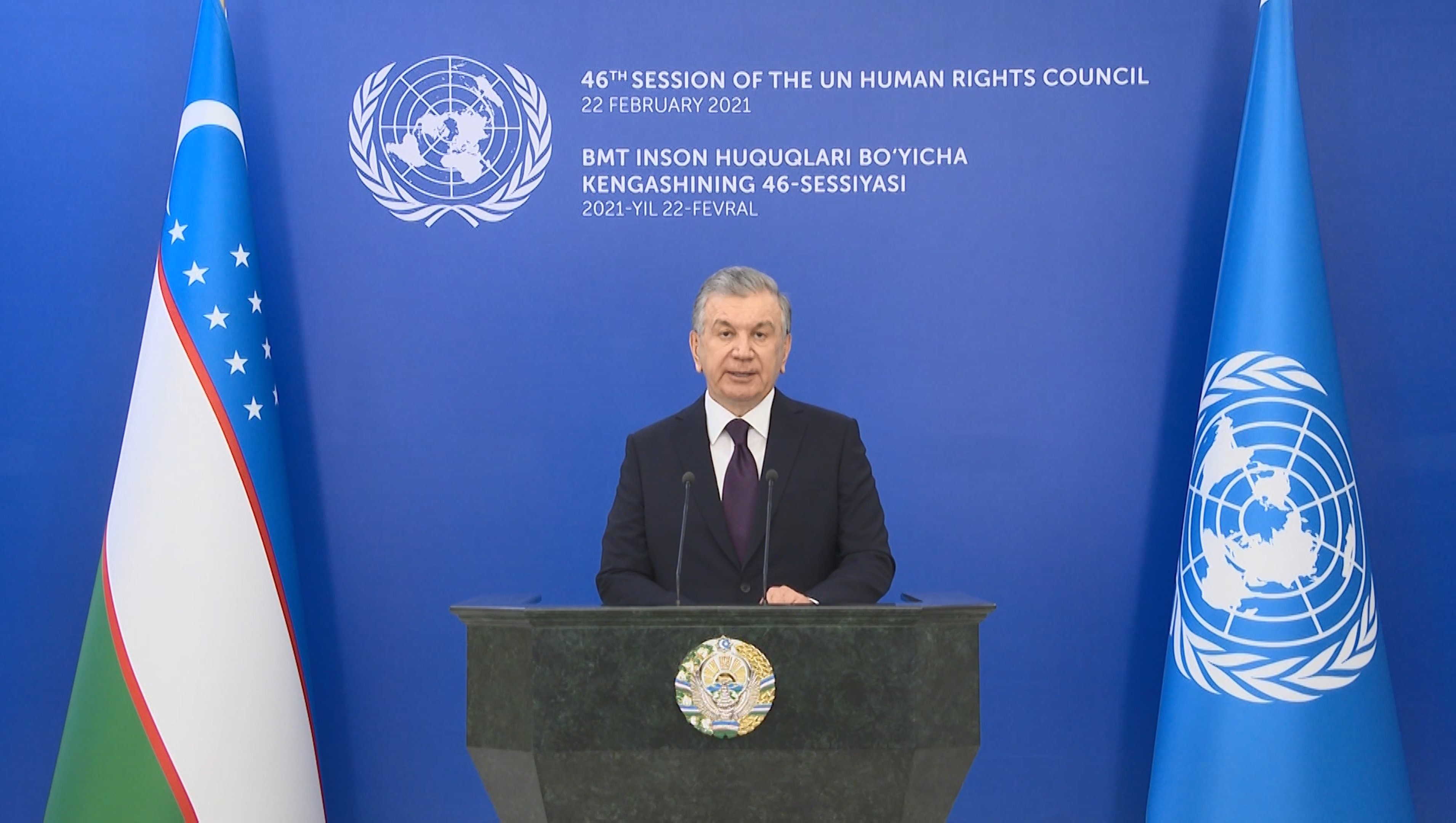 Uzbekistan and United Nations cooperation in the field of human rights

In Uzbekistan, the protection of human rights is considered one of the priorities of cooperation with the UN. Today, the country has a stable political system that meets the modern criteria of democracy and human rights, and the legislative, executive and judicial authorities at all levels are actively working to strengthen respect for human rights and to promote human rights education throughout the country. But the most important thing is that the Uzbek society maintains respect for the principles of the rule of law and human rights.

We in Uzbekistan highly appreciate the efforts of the UN Human Rights Council and the Office of the High Commissioner for Human Rights to strengthen the protection of human rights around the world. For without ensuring human rights, it is impossible to advance socio-economic, political, legal, cultural and humanitarian development of States.

Uzbekistan has developed national indicators for the implementation of the UN Sustainable Development Goals. The Strategy of Action adopted by the President of Uzbekistan on five priority areas of the country’s development in 2017-2021 is a “Roadmap” for implementation of the UN Sustainable Development Goals. Uzbekistan was the first Central Asian State to establish a system of national human rights institutions, which includes a parliamentary Ombudsman, a Children’s Ombudsman, a Business Ombudsman and a National Human Rights Centre.

In June 2020, the National Human Rights Strategy of Uzbekistan was adopted for the first time and is being consistently implemented. It provides for the implementation of the recommendations of the UN Human Rights Council and the treaty bodies.

The adoption of the National Strategy took into account the views of not only the expert community, but also the general public and international organizations. Uzbekistan maintains an active and constructive dialogue with the UN Charter and Treaty bodies, specialized agencies and Special procedures of the UN Human Rights Council.

The Government submits timely periodic reports on the implementation of the main international human rights treaties, as well as on the follow-up to the recommendations of the treaty bodies (41 reports).

In Uzbekistan, more than half of the population is young people. As such, much is being done to ensure seamless integration of every young person into society and realize their potential. In the way of guaranteeing aforementioned missions, Concept of “Youth of Uzbekistan – 2025” has been adopted, Youth Parliament and the Agency for Youth Affairs are functioning.

In August 2020, the Samarkand Forum on Youth Rights was held under the auspices of the United Nations with a view to attract global attention to matters related to youth.

In his speeches at the 75th anniversary session of the UN General Assembly, the 46th session of the UN Human Rights Council, as well as in his Address to the Uzbek Parliament, the President of Uzbekistan identified the key priorities of New Uzbekistan on human rights: • ensuring the right to health; • gender equality; • protection of the rights of persons with disabilities; • protection of the youth rights; • human rights education; • strengthening the independence of the courts; • the fight against torture; • development of regional cooperation on human rights.

The first initiative. Uzbekistan is pursuing a radical policy of increasing the role of women in the political, public and business life of the country. Two new laws on gender equality and the protection of women from violence and harassment have been adopted.

It is planned to hold a Women Leader’s Dialogue of Central Asian states and a Regional Women’s Business Forum in Uzbekistan.

The third initiative. Today, intellectually and spiritually developed, proactive young people are becoming a driver of sustainable progress. There are more than 2 billion young people in the world. This year in Uzbekistan is declared the Year of Supporting Youth and Strengthening Public Health. Most of the challenges facing humanity – such as threats to peace and security, terrorism and extremism, racism, climate change, and the COVID-19 pandemic must be addressed with active participation of young people.

The initiative to adopt an International Convention on the Rights of Youth, put forward by the President of Uzbekistan from the high rostrum of the United Nations General Assembly, has been supported with great interest by the international community.

This year, we plan to hold a World Conference on Youth Rights under the UN auspices.

The purpose of the international forum is once again to give the youngest people the opportunity to directly participate in the development and implementation of national, regional and global strategies aimed at meeting their immediate needs, protecting their rights, freedoms and legitimate interests.

The President of Uzbekistan also put forward a proposal to establish the institution of a UN Special Rapporteur on Youth Rights.

In the current International Year for the Elimination of Child Labour, a Law on the Children’s Ombudsman will be adopted.

Together with the Office of the High Commissioner for Human Rights, we are planning to hold a Global Forum on Human Rights Education. In order to develop the system of human rights education, Uzbekistan contributes to the UN Voluntary Fund for Human Rights.

The fifth initiative. Uzbekistan pays priority attention to the deepening of reforms in the judicial and legal sphere, as a result of which concrete measures have been taken to implement international standards in the field of judicial independence and the protection of the right to a fair trial.

Implementation of the recommendations of the Special Rapporteur on the Independence of Judges and Lawyers has begun.

In order to ensure the independence of the judiciary and regulate the selection and appointment of judicial personnel, the President of Uzbekistan proposed that the UN Human Rights Council consider the development of universal principles of the judicial councils.

The sixth initiative. The fight against torture is a priority area of judicial and legal reforms in Uzbekistan. Work has begun on the implementation of a national preventive mechanism for the elimination of torture. The closure of the specialized penal colony located in the village of Zhaslyk was an important humanitarian event. As a result of the measures taken, the number of convicts held in places of deprivation of liberty has decreased by almost three times.

Over the past short period, we have made significant progress in our interaction with the special procedures. Visits of two Special Rrapporteurs were carried out.

We intend to ratify the Optional Protocol to the Convention against Torture. Uzbekistan invites the UN High Commissioner for Human Rights and the UN Special Rapporteur on Torture to pay a visit.

Moreover, we have decided to send a standing invitation to all mandate holders to visit our country. Of course, cooperation with distinguished mandate holders will help to make headway in the effective implementation of reforms in Uzbekistan. The seventh initiative. Uzbekistan also intends to continue to promote the establishment of a regional human rights mechanism in the Asian region. In this regard, a permanent platform has been created – the Samarkand Forum on Human Rights.

There is no universal model of development in the world that is equally suitable for all States in the same historical period. The sad experience of a number of countries clearly shows that attempts to impose “unified standards” of democratic development, without taking into account specific historical, social and other aspects, as well as national and religious traditions, are counterproductive. Uzbekistan fully endorses the role of the UN in international peacekeeping, maintaining security, promoting sustainable development, and guaranteeing human rights.

As an active member of the Human Rights Council, Uzbekistan wishes to express explicitly its continuous readiness for broad and mutually beneficial cooperation with all countries of the world and practical dialogue with the UN.