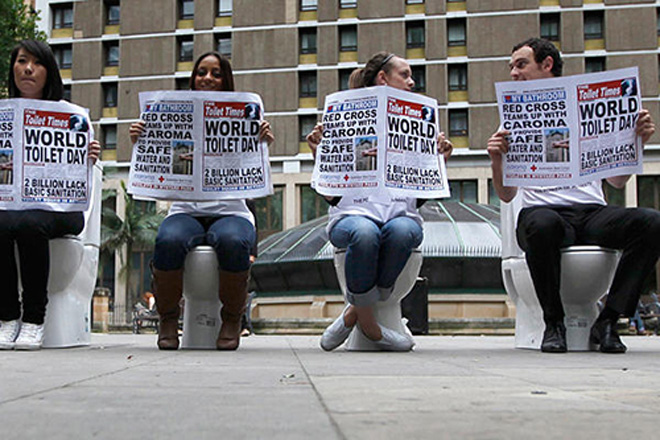 18 November 2016 – To mark the 2016 edition of World Toilet Day, along with urging action to tackle the oft-neglected global sanitation crisis, the United Nations is also spotlighting the impact of sanitation – or lack of it – on livelihoods and work environments.

While the Day is an opportunity to raise awareness about the 2.4 billion people around the world who live without a toilet and the rates of diseases due to inadequate access to sanitation and unsafe water, this year, the theme toilets and jobs focuses on how lack of sanitation impacts peoples’ livelihoods: the UN estimates that in many countries, it creates a five per cent loss in gross domestic product (GDP).

“Toilets play a crucial role in creating a strong economy. A lack of toilets at work and at home has severe consequences, including poor health leading to absenteeism, reduced concentration, exhaustion, and decreased productivity,” said Secretary-General Ban Ki-moon in a message on the Day.

Meanwhile, 17 per cent of workplace deaths are caused by disease transmission – an incentive to invest in access to proper sanitation in order to avoid the approximately $260 billion that is lost every year due to poor sanitation and unsafe water.

According to the Secretary-General, “every dollar invested in water and sanitation leads to $4 in economic returns.”

Investing in appropriate toilets is especially important for women and girls,” he says, “so that they have private, clean and safe facilities, and are able to manage menstruation or pregnancy safely.”

Safe access to clean toilets is critical to implementing Goal 6 of the UN Sustainable Development Goals (SDGs), which calls for clean water and sanitation for all.

“Delivering on this basic human right,” said Mr. Ban, “is good for people, business, and the economy. Let us continue working towards a world where everyone, everywhere, has adequate and equitable sanitation.”