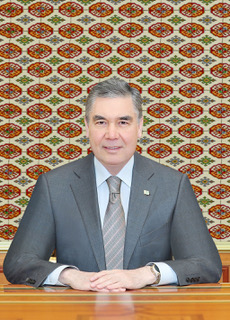 On September 22, 2020, the high-level week of the 75th anniversary session of the United Nations General Assembly began. On the same day, a transmission of the speech of the President of Turkmenistan Gurbanguly Berdimuhamedov took place. In his speech, the Head of State outlined in detail the position of Turkmenistan on key aspects of the international agenda, put forward a number of significant initiatives of a political, socio-economic and humanitarian nature.

At the beginning of his speech, the President of Turkmenistan expressed words of deep empathy in connection with the loss of numerous inhabitants of the planet who did not survive the blow of the coronavirus pandemic.

President Gurbanguly Berdimuhamedov dwelled on the measures taken in Turkmenistan, which were carried out in accordance with the recommendations of the World Health Organization and in close cooperation with the relevant UN departments to counter this threat.

The Head of State noted that for a speedy victory over the pandemic, close professional coordination and unification of efforts of scientific and medical communities around the world are necessary. Having voiced the importance of multilateral cooperation on the problem of dangerous viral diseases, President Gurbanguly Berdimuhamedov noted the importance of fully launching channels of scientific diplomacy. He added that under the auspices of WHO, it is advisable to establish a Special Program of the World Health Organization to study the genome of coronavirus, develop a multilateral mechanism to combat pneumonia, and create a Methodological Center for the Treatment and Prevention of Acute Diseases.

Noting that the current session of the UN General Assembly is being held in a difficult period, the Head of Turkmenistan called for an objective look at the general international situation, shattered by the neglect of international law, military and political rivalry, which, unfortunately, is observed in the world today.

To resolve this situation, the Head of State noted “that it is necessary to consolidate efforts aimed at strengthening the role of international law, multilateral legal instruments of the existing system of global security, strict observance by all countries of generally recognized norms arising from the UN Charter. This is the only way to maintain stability and predictability in world politics, to reduce the risks of conflicts. "

The President of Turkmenistan emphasized that in order to achieve these goals, it is necessary to restore trust in international politics, to establish a culture of respectful dialogue.

In this regard, the important role of the policy of permanent Neutrality of Turkmenistan was underlined. As a matter of fact, its keystones contain the principles of humanism and peaceful approach to the resolution of global challenges and response to the threats of modern times. As is known, this year Turkmenistan honors the 25th anniversary since obtaining the given status. The model of positive neutrality developed by Turkmenistan calls not for impartiality, but unity by means of political-diplomatic tools. This concept is vividly presented in the project of the resolution initiated by Turkmenistan entitled “the Role and Significance of the Neutrality Policy in Sustaining and Strengthening International Peace, Security and Sustainable Development,” the presentation of which was held in January of current year in the UN headquarters. The draft of the resolution is under consideration.

Then, President Gurbanguly Berdimuhamedov added that “the UN General Assembly, at the initiative of Turkmenistan, adopted a resolution declaring 2021 the Year of International Peace and Confidence. In the light of the implementation of the provisions of this document, Turkmenistan sets forth the initiative to hold an International Forum of Peace and Trust next year. The leader of Turkmenistan expressed confidence that this Forum will give an important impetus to the promotion of peace, stability and will contribute to the strengthening of international cooperation.

In this context, the important role of preventive diplomacy was noted, which is consonant with the UN principles. Noting that the policy of Neutrality is aimed at ensuring regional peace, security and development, the President of Turkmenistan stressed that within the framework of the upcoming session, the Turkmen side intends to propose to the General Assembly to consider the draft resolution “The Role of the Regional Center for Preventive Diplomacy for Central Asia.”

The Head of State noted that the achievement of peace, security and progress in the Central Asian region depends on the settlement of the situation in Afghanistan. “The position of Turkmenistan here is principled and unchanged: there is no alternative to the negotiation process,” the President noted. In this regard, it was noted that Turkmenistan is ready to assist in the advancement of this process, in particular, by creating the necessary political and organizational conditions on its territory.

Along with political stabilization, the economic and social reconstruction of Afghanistan is also important. In this regard, Turkmenistan stands for the implementation of large infrastructure projects with Afghan participation, primarily in such important areas as energy, transport and communications. Turkmenistan has already initiated a number of projects in this direction, in particular the construction of a gas pipeline along the Turkmenistan-Afghanistan-Pakistan-India route, railway branches, and fiber-optic communication lines reaching the territory of Afghanistan.

The President of Turkmenistan stressed that Turkmenistan firmly believes in the future of the UN, will continue to strengthen and build up strategic partnership with this Organization for the benefit of all mankind.

Moreover, in his address, the head of Turkmenistan voiced the state of the global economy, which was going through a difficult period this year. It was emphasized that, being a staunch adherent of the Sustainable Development Goals, Turkmenistan is actively using all the necessary potential in this direction. Unfortunately, the pandemic has seriously undermined the colossal progress towards the SDGs.

The Head of State stressed that Turkmenistan intends to intensify work on the creation of UN international legal instruments in the field of stability and reliability of energy transit. As is known, the proposals of Turkmenistan in this area have more than once been confirmed by the relevant resolutions of the UN General Assembly.

The leader of Turkmenistan also noted the importance of developing cooperation in the field of transport, adding that Turkmenistan proposes to consider the issue of ensuring stable international transport in times of emergency. It was also expressed the intention of Turkmenistan to host the International Conference of Ministers of Landlocked Developing Countries, which will make it possible to intensify interaction in this direction.